Patricia Emerson’s humility and work ethic stretches as far as her legacy in Brielle and throughout Monmouth County, and she has done her due diligence to instill the same values in the thousands of students that have walked through her classroom door.

A 1973 graduate of Swarthmore College and a northwestern Oregonian girl to her core, spending less than a minute with Ms. Emerson shows you that teachers are as invaluable to society as currency itself.

As Ms. Emerson prepares the next phase of her life, moving back to the Oregon coast, she is already looking passed the aura of retirement to a new venture; teaching the teachers.

“Working with teachers is what I see in my great future,” she said. “I have had the best career possible. I have gone to the Dominican Republic for social justice reform. I created a movie on it. I have been the luckiest human on the planet and I’m sort of waiting for it to change. I feel like I’ve had more than my share of great luck…I don’t want to get cavalier. I feel blessed all the time. I try to carry it with me, make a difference, pay it forward, all that. I know it sounds cliche, but if you’re lucky, I feel like that’s what you owe. You bring it back. And I’m basically expecting to live the rest of it that way.”

Ms. Emerson needn’t even speak for herself, as her colleagues will seize any opportunity to talk about her before she utters a word. A word, by the way, that shows you how eloquent and articulate she is.

“Her resume is just unbelievable,” explained Christine Carlson, superintendent and principal of Brielle Elementary. “When I first came here and she told me about the national conference of teachers of english, she said ‘I’m going because I want to learn.’”

And a learner, she is. Ms. Emerson’s teachings go beyond the classroom, as well, as Ms. Carlson described.

Ms. Emerson studied East Asian Religion and Philosophy at Swarthmore, but even she admits she knew was destined to be a teacher from a young age.

“When I was a kid, my brothers and sisters, God bless them, always played school with me when it was raining in Portland and it was raining a lot,” she said. “So we played a lot of school and I tell my students now that when I was a kid, I loved to give report cards and put A’s and plus’. And now what hate most about teaching is the grading.”

As she prepares herself for retirement — a retirement that’s anything but by her measure — she admits grading has become the most tedious aspect of her passion.

“I love getting the students to tell me what they can do. I hate telling them what they can do. So I say to them, if I ever teach in some way, shape, or form, again, people will self-grade and tell me exactly what they deserve. I will never again give a grade unilaterally. That’s what I’m giving up; grading,” said Ms. Emerson. “I think children, from whatever age, are best served being metacognitive. Training themselves to look at what they were supposed to be doing.”

While it may seem obvious at this point, Ms. Emerson takes a unique approach to teaching. Her teaching style isn’t brash, but certainly isn’t boring. Measured, yet eccentric. A downright audacious approach to teaching, her commitment to the learned environment has proven unshakable for over 30 years.

One of the more common phrases you’ll hear from Ms. Emerson is, “I say to my kids…” It’s an interesting phrase because, coming from anyone else, it would sound reflective.

Perhaps even more valuable than her status as a teacher is her passion for writing.

“Writing has taken me everywhere,” she said. “Writing took me to South Africa twice. And writing allowed me to do projects with these kids because they wrote stories and our kids made digital movies out of them.”

Her writing is impressive, shadowed only by her strict discipline; a lesson learned from family hardship.

“If any model gives you faith about change, it would be my parents. My dad lost everything in a bad business deal after being one of the wealthiest men in the city. My house was seized when I was just ready to go to Swarthmore. If you have in front of you a model like that, you better learn. Because you’ve been given the greatest gift. A model of great success and then a model of failure that wasn’t failure at all,” said Ms. Emerson. “My dad said, ‘We have each other. The worst thing would be losing us.’ Was he disappointed? Sure. Did he feel terrible? Absolutely. Having said that, he and my mom buckled in, lived their lives to the end, I never saw despair, I never heard them talking about, ‘Oh, woe is me.’ None of that. They just soldiered on.”

After bouts of teaching in Columbia and parts of South America, South Africa, and advocating for social justice reform in the Dominican Republic, alongside finding love more than once, Ms. Emerson “settled down” in Toms River to raise her son and help her husband with his business.

Along with her teaching, her accomplishments and contributions to the area are extraordinary. She’s helped open up Brielle Elementary School to the world of technology in the classroom with such programs as Lucidpress, an interactive publishing application that allows children to create stunning original content for the classroom. She’s held a seat at the negotiating table for teacher’s contracts for three years. She’s traveled to teacher’s conventions all across the country, presenting her teaching style and life’s work for others to marvel and imitate.

So as Ms. Emerson wraps up her 25th and final year with Brielle Elementary, it’s no wonder her colleagues are not ready to let her go.

“I knew the day I met her 19 years ago that she was something great,” said Vanessa Hyland, a fellow teacher at Brielle Elementary. “Trish has given nothing but 110 percent since the day I met her. And I have yet to meet anyone in this profession with the same enthusiasm and dedication as she has. Her passion for literature is evident to her students, making even the most disenchanted learned appreciate a good book. She makes reading and writing an art.

“I know her job will not end this June, I wish her the best and I want to thank her for making me a better mother, teacher, and friend. Thank for you for the memories, the laughs, and my addiction to pistachio nuts,” Ms. Hyland said through tears.

“She has been the highest quality teacher that I have ever worked with,” said Ms. Carlson. “Tricia is just an amazing teacher, friend, colleague- a great example. She is a true teacher leader, something that this building is going to miss because teacher leaders are very important. She did it naturally. She did it all the time.”

“I hope I conveyed to my students that I’m privileged. They’re privileged. And I owe. It’s our job. They owe it to others to live a really productive life, a good life. One that spreads goodness because everybody doesn’t have the gifts I’ve been given. I hope I conveyed that to them. Life is a one-shot deal, I think, and you’ve got to jump in.” 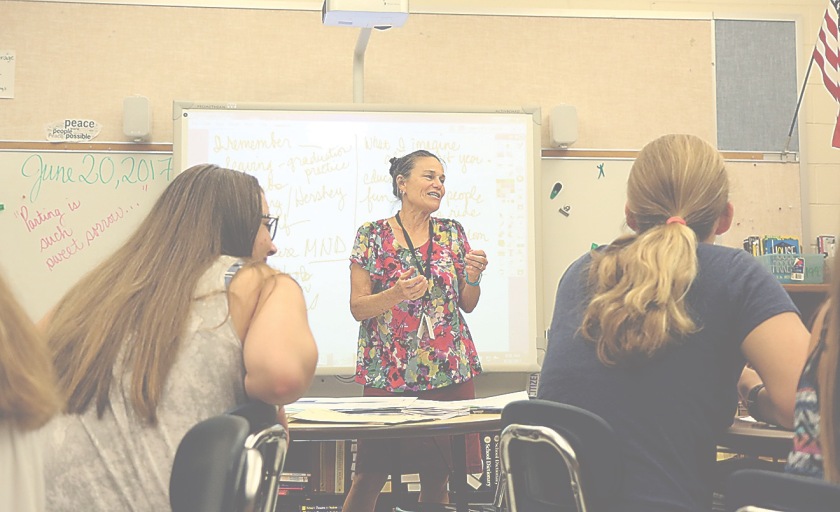 Keeping in step with the wide curriculum that is her life, Ms. Emerson is the living, breathing antithesis of that age-old Bernard Shaw maxim, “those who can’t, teach.” A joke, of course, but nonetheless taken seriously by some who categorize the world into do’s and don’t’s, those who carry against those who are carried.

Then there is Ms. Emerson, who embodies a spirit that screams, “Those who teach, can.”

“I’m open to learning,” said Ms. Emerson. “And that’s the coolest thing because these kids get to teach me. Do you think this tech stuff comes to me naturally? It terrifies me! So it’s the openness, no one anymore can know everything. Everyone loves to teach something. I’m willing to learn and isn’t that the model you want in school? I’m willing to learn too.”